On this past June 10th and 11th, delegates from the Ministries of Health of Brazil, Costa Rica, Guyana, Haiti, Dominican Republic, Surinam, and Trinidad and Tobago met in the city of Santo Domingo, Dominican Republic to analyze the progress made towards the elimination of lymphatic filariasis (elephantiasis) in line with framework of the 2009 PAHO Resolution (CD49.R19) for the control and elimination of Neglected Infectious Diseases (NID), the WHO Roadmap for Neglected Tropical Diseases, and the London Declaration.

Lymphatic Filariasis (also known as elephantiasis) is a parasitic infection caused by nematodes of the genus Wuchereria and Brugia. In the region of the Americas, the only transmitted species is Wuchereria bancrofti, and the Culex mosquitoes are the most common vectors of the disease. The parasites cause lesions within the lymphatic vessels, and the subsequent lymphedema progresses with secondary bacterial infections. Lymphedema causes deformity and severe disability, further affecting the personal life, work, and family of those who suffer from the disease. Mass treatment with diethylcarbamazine citrate (DEC) plus albendazole once a year over a five to six year period has proven to be an effective measure to interrupt transmission for all persons living in endemic communities.

Due to joint efforts between countries with foci of the disease, PAHO/WHO along with partners and allies in the region have achieved interruption of transmission in three countries (Costa Rica, Surinam, and Trinidad and Tobago) which were removed by the WHO from the list of endemic countries in 2011. However, in the region of the Americas, active foci still exist in Brazil (Recife metropolitan area), Guyana, Haiti, and Dominican Republic, and an estimated twelve million people in the region are at further risk of infection, especially in Haiti.

Each year there are two consecutive meetings in the region: one is held with program managers of lymphatic filariasis elimination to review progress in action implementation, challenges, and opportunities; and the other is held with the Regional Elimination Program Review Group (RPRG) which reviews and approves the donation requests for albendazole that countries make to PAHO / WHO, provides guidance and direction on the development and implementation of the action plans of the countries based on the best available evidence, identifies operational research needs, and supports countries to overcome challenges and continue efforts towards elimination.

These meetings also count on the participation of partners such as the Centers for Disease Control and Prevention of the United States (CDC) a WHO delegate of the Global Program to Eliminate Lymphatic Filariasis, PAHO delegates, recognized experts in lymphatic filariasis and those from public health institutions and universities in the region, NGO representatives, a representative of Glaxo Smith Klein (a benefactor of albendazole), among other important actors who are contributing to progress made towards the elimination of lymphatic filariasis in the region. 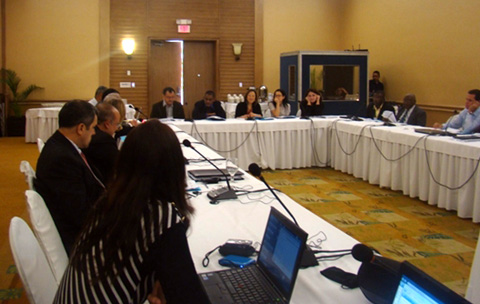 Workshop between delegates of Ministries of Health, PAHO/WHO, partners, academia and experts in lymphatic filariasis.

Malaria Day in the Americas