Population Covered by Ban on Tobacco Advertising has Doubled

GENEVA / PANAMA CITY, Panama ¦ 10 July 2013 — At 2.3 billion, the number of people worldwide covered by at least one life-saving measure to limit tobacco use has more than doubled in the last five years, according to the WHO Report on the Global Tobacco Epidemic 2013. The number of people covered by bans on tobacco advertising, promotion and sponsorship, the focus of this year's report, increased by almost 400 million people  residing mainly in low- and middle-income countries. 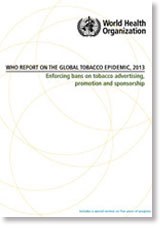 Furthermore, the Report shows that 3 billion people are now covered by national anti-tobacco campaigns. As a result, hundreds of millions of nonsmokers are less likely to start.

However, the Report notes, to achieve the globally agreed target of a 30% reduction of tobacco use by 2025, more countries have to implement comprehensive tobacco control programmes.

"If we do not close ranks and ban tobacco advertising, promotion and sponsorship, adolescents and young adults will continue to be lured into tobacco consumption by an ever-more aggressive tobacco industry," says WHO Director-General Dr Margaret Chan. "Every country has the responsibility to protect its population from tobacco-related illness, disability and death."

Tobacco is the leading global cause of preventable death and kills 6 million people every year. It can cause cancer, cardiovascular disease, diabetes and chronic respiratory diseases. If current trends continue, the number of deaths attributed to tobacco smoking is projected to rise to 8 million a year by 2030. In defiance of the deleterious effects of smoking, tobacco companies are spending tens of billions of dollars each year on advertising, promotion and sponsorship.

"We know that only complete bans on tobacco advertising, promotion and sponsorship are effective," stresses Dr Douglas Bettcher, the Director of WHO's Prevention of Noncommunicable Diseases department. "Countries that introduced complete bans together with other tobacco control measures have been able to cut tobacco use significantly within only a few years."

Other key findings of the report include:

In 2008, WHO identified six evidence-based tobacco control measures that are the most effective in reducing tobacco use. Known as "MPOWER", these measures correspond to one or more of the demand reduction provisions included in the WHO Framework Convention on Tobacco Control (WHO FCTC): Monitor tobacco use and prevention policies, Protect people from tobacco smoke, Offer help to quit tobacco use, Warn people about the dangers of tobacco, Enforce bans on tobacco advertising, promotion and sponsorship, and Raise taxes on tobacco.

This year's report is the fourth in the series of WHO reports on the status of the MPOWER measures. These measures provide countries with practical assistance to reduce demand for tobacco in line with the WHO FCTC, thereby reducing related illness, disability and death.

The WHO FCTC entered into force in 2005 and, with 177 Parties today, is a powerful tool to combat the deadly tobacco epidemic.

Panama was chosen for the launch of the report because of its leadership in implementing tobacco control measures. It is one of five countries in the Americas that have completely banned tobacco advertising, promotion and sponsorship and was the first to do so in the Region (in 2008).