'People in the Americas are healthier and stronger' thanks to Pan American cooperation in health, says PAHO Director 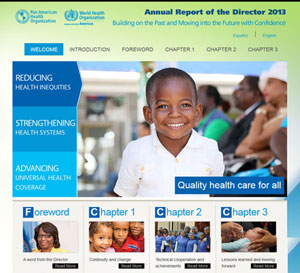 Pan American Health Organization (PAHO) Director Carissa F. Etienne told ministers of health from PAHO Member states today that "the people of the Americas are healthier and stronger, by most every measure," thanks to their health leadership and collaboration within and across the region's countries.

Etienne's remarks came during her presentation of the 2013 Annual Report of the Director to the 52nd PAHO Directing Council, which is meeting this week at PAHO headquarters in Washington, D.C.

The annual report provides an update on PAHO's technical cooperation activities and their contributions to regional health achievements.

Topping the list of regional health achievements during the reporting period, said Etienne, was Colombia's becoming the first country in the world to eliminate onchocerciasis, also known as river blindness. Colombia's 16-year elimination effort was led by the National Institute of Health and the Ministry of Health and Social Protection with support from PAHO, the Carter Center's Onchocerciasis Elimination Program of the Americas, and Merck Laboratories' Mectizan Donation Program.

Etienne also cited the significant progress in PAHO member countries toward meeting the health-related MDGs, including reducing infant mortality, reducing the incidence of malaria and tuberculosis, and reducing the spread of HIV/AIDS. She noted that the Region of the Americas has the highest annual rate of decline in tuberculosis incidence of any WHO region. Moreover, "the Region shows positive trends in providing safe drinking water, access to reproductive health, to affordable, essential drugs and to treatment for people living with HIV/AIDS," she noted.

Other developments detailed in the report include the launch in 2012 of the new Regional Coalition for Water and Sanitation to Eliminate Cholera in Hispaniola by PAHO in partnership with UNICEF, the U.S. Centers for Disease Control and Prevention (CDC), Spain's international cooperation agency, AECID, and the Inter-American Association of Sanitary Engineering and Environmental Sciences (AIDIS). The coalition provided technical support for the governments of Haiti and the Dominican Republic to develop national plans to eliminate cholera and is now mobilizing resources for the plans' implementation.

The report also describes continuing efforts by PAHO and its member countries to address noncommunicable diseases (NCDs), including by approving a regional strategy that seeks to raise the profile of NCDs on countries' development and economic agendas. In addition to providing technical cooperation for the strategy's implementation, PAHO in 2013 launched the Women's Cancer Initiative, an alliance of public and private organizations committed to reducing breast and cervical cancer. Also, the PAHO-convened SaltSmart consortium endorsed a multi-year plan to cut dietary salt consumption to reduce hypertension and cardiovascular disease.

PAHO's Annual Report of the Director 2013 covers the last seven months of the organization's former administration, led by Mirta Roses Periago, and the first five months under Etienne, who took office in February 2013.

Going forward, Etienne said PAHO's work would prioritize the goal of universal health coverage while focusing its technical cooperation on the areas of communicable and noncommunicable diseases, promoting health throughout the life cycle, health systems strengthening, and preparedness, surveillance and response.

PAHO is "prepared and ready to support Member States in their drive towards the goal of universal health coverage as the first and most necessary step toward realizing our vision of our region as one where every individual lives a long life of dignity, health and productivity," said Etienne.