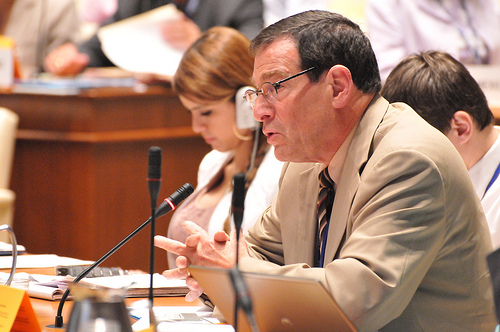 The 52nd PAHO Directing Council this afternoon discussed a proposal that aims to ensure that national immunization programs have the necessary skills to meet the challenges of decision-making processes. To achieve this, the proposal suggests expanding the evidence base beyond cost-effectiveness, institutionalizing an evidence-based decision-making process for new vaccines, and integrating policy-making and planning for national immunization programs.

The country representatives discussed the proposal and presented their experiences in this field. The delegate from Jamaica explained that in the last decade national immunization programs have been faced with complex decisions, such as the introduction of new vaccines. She said that the countries of the Caribbean do not have Technical Advisory Grups (TAG), but rather rely on the Caribbean Managers Meeting to receive support in the decision making.

The delegate from the United States considers that regional grouping could effectively provide a basis for national immunization programs. "TAGs will facilitate evidence-based decision making," he said. The United States also supports an expanded implementation of the PROVAC program, and considers important to include vaccines for acute infections such as chronic hepatitis B and cervical cancer.

The delegate from Dominica, David Johnson, explained that based on the recommendations, seasonal influenza vaccine was introduced in 2011. He said that although the cost of the vaccine is high, the impact of the disease on the population is far greater. The delegate expressed Dominica's aspiration to achieve 100% coverage of its API program.