Washington, D.C., 23 October 2013 (PAHO/WHO) — During a briefing at the U.S. Capitol, PAHO Director Carissa F. Etienne urged increased collaboration and cooperation between the United States and the countries of Latin America and the Caribbean, especially to reduce health inequities that persist despite considerable health progress in recent years. 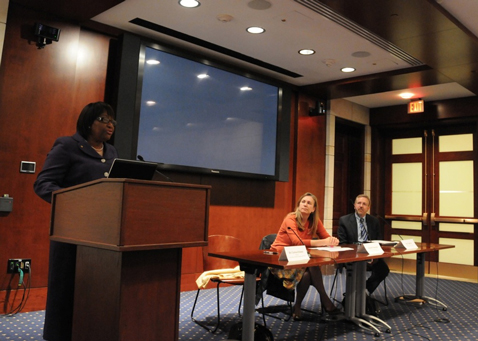 "We have eradicated smallpox and polio and eliminated measles and rubella, and expended access to drinking water and sanitation, and our levels of vaccination are among the highest in the world," said Etienne. "Despite the progress, the region is characterized by large differences in the conditions in which people are born, grow, live, work and age. This inequity among and within countries not only threatens the public's health, it threatens human rights, economic prosperity, sustainable development, and stability throughout the region."

She cited examples of significant health inequities within and among PAHO member countries, including:

She also pointed to major health achievements by the countries of Latin America and the Caribbean, including:

Dr. Etienne said that continued progress in these areas and in reducing health inequities would require continuing improvements in health systems and expanded access to health care, as well as attention to the social determinants of health. She noted that PAHO is working with its member countries in all these areas and said continued and increased U.S. cooperation with PAHO and the countries was important to further progress.

"Successful outcomes for all of these health issues are predicated on access to quality, comprehensive health-care services that are based on the primary health care approach and that are people-centered," said Dr. Etienne. "I ask for your solidarity as we move forward to realize a vision for this hemisphere where our societies are free from inequity, where people have access to the social determinants of health and live in healthy environments that enable them to lead long, dignified, healthy and productive lives."

The Oct. 23 briefing was organized by Rep. Sam Farr of California as part of a series titled "Latin America on the Rise." Farr, a former Peace Corps volunteer in Colombia, has organized more than a dozen briefings focused on Latin America and U.S.-Latin America relations for members of Congress, their staff and others.

PAHO Director Etienne is scheduled to return to the U.S. Capitol on Oct. 24 for a special briefing on cholera in the Americas.