No endemic transmission of measles in the Americas since 2002

Cases imported from other continents continue to pose a risk to the region. Globally, 226,722 measles cases and 122,000 deaths were recorded in 2012.

Washington, DC, 14 February 2014 (PAHO / WHO) ? Endemic transmission of measles in the Americas has not been reported since 2002, when Venezuela reported the last such case, and measles deaths have disappeared from the region. These successes, achieved by the countries of the Americas with support from the Pan American Health Organization/World Health Organization (PAHO/WHO), make the Americas the first region in the world to eliminate one of the world's most contagious diseases and a leading cause of death for young children. 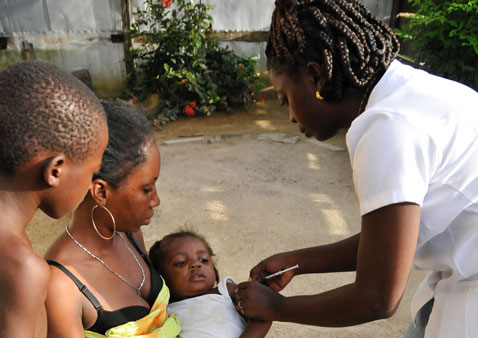 Key reasons for the success include high rates of vaccination coverage in the region's countries and early detection of cases. However, the region continues to face the threat of imported cases from countries outside this hemisphere, where the virus still circulates. As of 2012, according to WHO estimates released last week, there were 226,722 measles cases and 122,000 deaths in other regions of the world. These figures represent declines of 77% in cases and 78% in deaths since 2000.

"For more than a decade, there has been no endemic measles in the Americas, thanks to countries' efforts to vaccinate children and maintain high coverage rates. But until the rest of the world eliminates the disease, we must be on the alert  for any reintroduction of cases that could lead to outbreaks and jeopardize the continuity of this public health milestone," said Dr. Gina Tambini, director of the Family, Gender and Life Course department at PAHO/WHO.

Before the establishment of PAHO/WHO's Expanded Immunization Program in 1977, more than 250,000 measles cases and 12,000 deaths were recorded yearly in the Americas. Starting in the 1990s, cases declined, but the most notable drop came after the region launched a major measles elimination initiative in 1994. The last recorded endemic outbreak of measles was in Venezuela and Colombia in 2001-2002.

Following the interruption of endemic circulation in November 2002, the countries of the Americas began counting cases imported from other regions, reporting a total of 2,771 imported cases up to 2012. Most of these (1,369 cases) occurred in 2011, when 171 outbreaks from importations were documented, resulting in sustained transmission in at least three countries (Canada, Ecuador and Brazil).

The PAHO/WHO-led elimination strategy implemented by the region's countries was based on experience gained in polio eradication. Its three main components were: completion of a one-time national "catch-up" campaign targeting all children ages 1 to 14 (to reach children who may have been previously missed); strengthening of routine immunization services to ensure that at least 95% of children are reached every year, and mass follow-up campaigns every four years, aimed at vaccinating at least 95% of all children 1-4 years. Vaccination campaigns to eliminate rubella have helped to maintain measles elimination by using a combination measles and rubella vaccine for adolescents and young adults.

A study on the cost-effectiveness of measles elimination in Latin America and the Caribbean, which included PAHO/WHO experts, estimated that the cost of preventing one measles case is $71.75, and preventing one death costs $15,000, indicating cost-effectiveness. The study also estimated that countries in the region have prevented 3.2 million measles cases and 16,000 deaths between 2000 and 2020 as a result of vaccination.

The region of the Americas has been a global leader in eradicating and eliminating vaccine-preventable diseases, beginning with smallpox in 1973 followed by polio in 1994 and measles, rubella, congenital rubella syndrome and neonatal tetanus more recently.