Ciro de Quadros, pioneer of polio eradication, is honored as a PAHO Public Health Hero of the Americas

Dr. Ciro de Quadros, a Brazilian epidemiologist who was a central figure in the eradication of polio from Latin America and the Caribbean, was today honored as a Public Health Hero of the Americas by the Pan American Health Organization/World Health Organization (PAHO/WHO).

De Quadros accepted the award from PAHO/WHO Director Carissa F. Etienne during an international vaccine symposium marking the 20th anniversary of the Sabin Vaccine Institute, where De Quadros is Executive Vice President and Director of Vaccine Advocacy and Education. 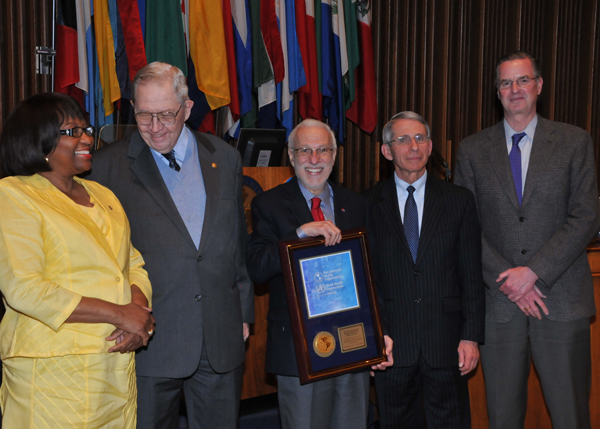 "Ciro's long and distinguished career in public health not only coincided with but indeed accelerated the growing use of vaccines to save lives and eliminate diseases in the Americas and beyond," said Etienne in honoring De Quadros.  "We at PAHO believe that no single person has done more to extend the benefits of immunization to people throughout the Americas."

"I am deeply honored to be recognized by PAHO and to have been part of Latin America's immunization efforts," said De Quadros.

In the late 1970s, De Quadros founded the Expanded Program on Immunization (EPI) at PAHO, which encouraged and supported the countries of Latin America and the Caribbean in making vaccines available for their populations that had previously been available only in wealthier countries.

In the early 1980s, De Quadros began advocating for the eradication of polio from the Americas, and in the next few years he successfully mobilized support from other immunization experts, other organizations and health authorities in PAHO Member States.

"His leadership and vision were essential to our region's becoming the first in the world to eradicate polio, a success story that inspired the global polio eradication campaign," said Etienne. "The list of your contributions is much longer, but all of us here are keenly aware that you have been a force for good in our region and in the world."

De Quadros was also the key figure behind the creation of the PAHO Revolving Fund for Vaccine Procurement, established in 1979. The fund pools demand for vaccines and other supplies, achieving economies of scale that allow participating PAHO member countries to purchase vaccines at low prices.

"Your leadership truly set the stage for PAHO's continued strength in immunization and, more important, for our region's success in maintaining immunization coverage rates that are the envy of other regions of the world," said Etienne.

De Quadros acknowledged the importance of collaborative efforts to the success of immunization efforts in the Americas and worldwide.

"While we still have much to accomplish in global health, our achievements to date would not have been possible without the leadership of governments and collaboration with development partners," he said.

In addition to heading PAHO's Immunization program, De Quadros also served as WHO's Chief Epidemiologist for the Smallpox Eradication Program in Ethiopia from 1970 to 1976. He is considered a leader in the development of surveillance and containment strategies that were used in the eradication of smallpox worldwide, in addition to leading polio and measles eradication efforts in the Americas.??

He has also served as Associate Adjunct Professor at the Johns Hopkins School of Hygiene and Public Health in Baltimore and Adjunct Professor in the Department of Tropical Medicine at The George Washington University School of Medicine and Health Sciences in Washington, DC. He completed his medical and public health studies in Brazil.

The Public Health Hero of the Americas, PAHO's highest distinction, was established for PAHO's Centennial celebration in 2002. It honors individuals who have made extraordinary contributions to improving the health and well-being of the peoples of the Western Hemisphere.