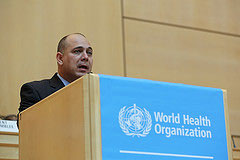 Geneva, 19 May 2014 (PAHO/WHO) — Minister of Public Health Roberto Morales Ojeda of Cuba was designated today as President of the 67th World Health Assembly, during the Assembly's opening session.

The presidency of the World Health Assembly rotates annually among the six regions of the World Health Organization (WHO). This year, it corresponded to the Region of the Americas. Morales Ojeda was proposed as a candidate and was accepted by WHO Member States during the opening plenary. It is the first time Cuba has occupied the position.

Morales Ojeda, who has served as health minister since 2010, said his designation reflects a "recognition of the results achieved by the national health system [of Cuba], which is characterized by being unified, free, accessible, with universal coverage."

"It is a great challenge to be able to address the broad agenda proposed for this 67th World Health Assembly, seeking better solutions and alternatives for the health of our peoples. But I am convinced, based on the quality of the discussions and the soundness of the documents that will be approved, that we can contribute to fulfilling the promise of guaranteeing health for all," he said.

The World Health Assembly is WHO's supreme decision-making body. Its main functions are to determine the WHO's policies, appoint the Director-General, supervise financial policies, and review and approve the Organization's budget.

On behalf of my government, I convey the deepest gratitude to the Member States here present, to the Pan American Health Organization and to all of those who contributed to confer Cuba the high honor of being selected to conduct the sessions of the 67th World Health Assembly. We accepted it as a recognition of the results achieved by the national health system, which is characterized for being unique, free, accessible, with universal coverage, based on Primary Health Care and it stands out for its broad community and intersectorial participation as well as for its profound internationalist conception.

Examples of these results are the child mortality rate achieved in 2013 of 4.2 per 1000 live births, indicator that has been maintained for more than five consecutive years under 5, as well as Cuba's contribution to health in more than 120 countries of the world, with the presence of 135 000 collaborators since 1960 and currently over 50 000 in 65 countries.

The World Health Organization, as leading authority in the health sector, has identified the need to seek new strategies which allow to face the increasingly complex and growing health problems of the peoples in the 21st century, and due to that, it has been proposed a comprehensive reform that contributes to its own improvement and to guide its work in the coming years, while reinforcing its intergovernmental nature.

Achieving a truly sustainable development is a common wish, and it has been widely acknowledged that people's health is both, a means to achieve it and at the same time an end.

In order to fulfil the Millennium Development Goals related to health, we must face the problems derived from multiple crises and from the existence of major inequalities.

Added to this, is the use of massive resources to deploy modern wars of conquest that cause thousands of deaths, while tens of millions of human beings die in silence, victims of poverty and of preventable and curable diseases. Just to quote an example, is enough to say that a supersonic fighter aircraft is equal to the cost of implementing 40 000 doctor's offices.

It is necessary to create closer links between the economic, social and environmental policies, as pillars of the sustainable development. In this regard, the Second Summit of the Community of Latin American and Caribbean States (CELAC), that Cuba was honored to host and chair on January, had as main theme "the fight against poverty, hunger and inequality."

We agreed at that moment that, in order to achieve fairer societies in our region, a better distribution of wealth and incomes, quality education and health services for all, the eradication of illiteracy, the establishment of true food security, among other vital issues for the human life are essential.

Cuba will also continue defending from this important group, actions of regional political cooperation and agreements to help improve the quality of health care in our countries.

The agenda of this Assembly includes pressing global health issues, and the general debate will refer to the relationship between climate change and health, where we will share the most successful experiences in the mitigation and adaptation to the climate change impacts on the health of the population.

I allow myself to indicate the words of the historic leader of the Cuban Revolution, Fidel Castro Ruz, when in the Rio Summit in 1992, he stated and I quote:

An important biological species is endangered due to the accelerated and progressive destruction of its natural living conditions: man. We are becoming aware of this problem only now when it is almost too late to tackle it. It is worthwhile indicating that the main responsibility for the brutal destruction of the environment lies with the consumer societies. (…) A better distribution of wealth and of the technologies available in the world could spare humanity such devastation. Less luxury and waste in a few countries could bring about a reduction of poverty and hunger in a large part of the planet. (…) Let the ecologic debt be paid and not the foreign debt. Let hunger disappear and not man. End of the quote, which I consider it retains its full validity.

Another aspect of great importance for health is to follow-up on the Political Declaration of the General Assembly of the United Nations, on the Action Plan for the Prevention and Control of Non Communicable Diseases, which represent a threat to the wellbeing of our peoples due to its growing burden of disease, disability and death.

Mother and child health, especially maternal mortality continues to be an unresolved issue, so this gathering should deeply analyze all its dimensions, as well as the Global Action Plan for Neonatal Health and the recommendations of the UN Commission on Life-saving Commodities for Women and Children.

The multisectorial action for a healthy aging, based on the life cycle, will be the subject of attention of this Assembly, as a major challenge to health systems and government agendas.

It is a great challenge to be able to cover the agenda proposed for the 67th World Health Assembly, in search of better solutions and alternatives for the health of our peoples, but I am convinced that from the quality of the debates and the strength of the documents that be approved, we will contribute to fulfil the commitment of ensuring health for all.

Thank you very much.