Geneva, 20 May 2014 (PAHO/WHO) — Officials from Brazil and Venezuela today signed a memorandum of understanding to strengthen joint action to eliminate onchocerciasis, also known as river blindness, from the Yanomami area, the last "focus" (known endemic area) in the Americas, which is shared by both countries. 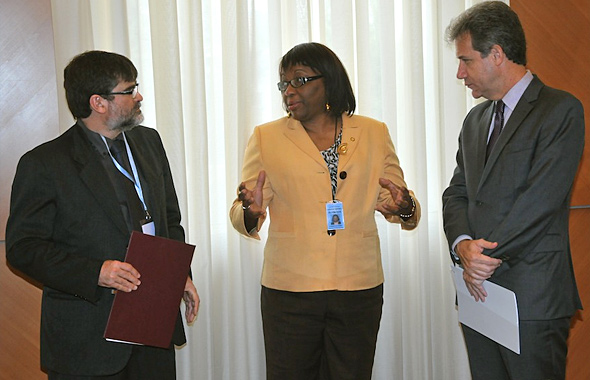 Minister of Health of Brazil Arthur Chioro and Minister of Popular Power for Health of Venezuela Francisco Armada signed the agreement during the 67th World Health Assembly, which is taking place in Geneva this week.

The Director of the Pan American Health Organization (PAHO), Carissa F. Etienne, said the agreement is important for the indigenous communities living in this area and noted that countries of the Americas have made significant inroads against river blindness. She pledged PAHO's support for the joint efforts of Brazil and Venezuela under the new accord.

Onchocerciasis is the second-leading infectious cause of blindness in the world and disproportionately affects people and communities in poverty. It is caused by the nematode Onchocerca volvulus, which is transmitted to humans through the bite of the Simulium mosquito.  It can cause severe skin disease and visual problems that can lead to blindness.

Under their new agreement, Brazil and Venezuela will exchange experiences in the training of local inhabitants as community health workers and will form binational humanitarian teams that will also include local residents. The countries will also coordinate the provision of integrated health care for affected communities on both sides of the border.

The accord also includes incentives for health professionals to work in the border area and provides procedures for guaranteeing access to health services for indigenous people who may lack civil documents, among other measures.

In 2013, Colombia was verified as the first country in the world to eliminate transmission of onchocerciasis. Transmission of the disease has now been interrupted in 11 of the 13 focus areas in the America; currently only 20,495 people in Brazil and Venezuela need continuous treatment. The antiparasitic drug ivermectin has been donated to affected countries by the global Mectizan® Donation Program. Minimum coverage with twice-yearly mass treatment has been maintained in the 13 focus areas since 2002.