Geneva, 20 May 2014 (PAHO/WHO) — In a special technical session today, delegates to the World Health Assembly dicussed a plan of action for ending preventable deaths among newborns. The plan establishes targets for reductions in mortality and proposes a series of actions for achieving them.

The technical session, led by WHO Director-General Margaret Chan and Melinda Gates, co-Chair of the Bill and Melinda Gates Foundation, coincided with the launch of a special Lancet series on newborn health. 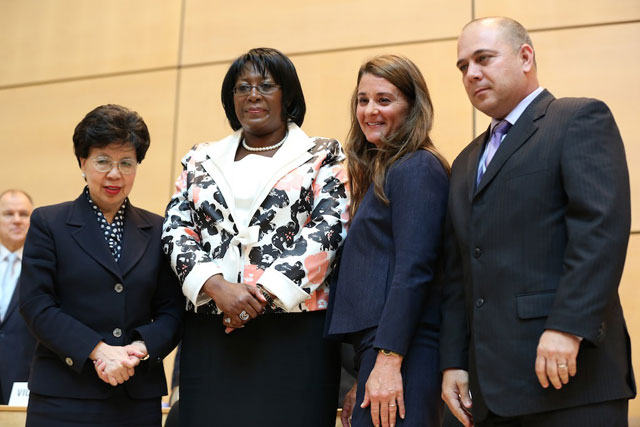 Chan said the proposed plan of action is based on interventions that have proven effective for reducing newborn mortality. These range from expanding access to obstetric care to improving information collection, especially in areas where newborn deaths are not registered. She said the plan offers a timely opportunity to change the way problems during childbirth and the first days of life are addressed.

On average, 44% of child deaths occur among newborns, said WHO experts who participated in the session. The plan proposes integrated action to reduce newborn mortality to an average of 9 deaths per 1,000 live births by 2030. It calls for greater investments in care before childbirth, during delivery, and in the first day and first week of life and seeks to reach all women and newborns by reducing inequities in access to care.

In her remarks, Gates said that health workers need to receive training in how to respond to complications that can lead to maternal or newborn death. She called for greater advocacy for this cause from different sectors and urged efforts to fill the gaps in information on maternal and neonatal mortality.

Ariel Pablos-Mendez, Assistant Administrator for Global Health at USAID, said the United States supports the action plan and its ambitious goal of significantly reducing mortality within a generation. "All of us together can achieve what must be done. Let's do it," he said.

Also participating in the panel were the ministers of health of Cambodia and Zambia, who described actions taken in their countries to reduce maternal and newborn mortality.

The proposed plan, Every newborn: an action plan to end preventable deaths, will be examined in working committees and then considered later this week for approval by the World Health Assembly as a whole.

Every newborn: an action plan to end preventable deaths