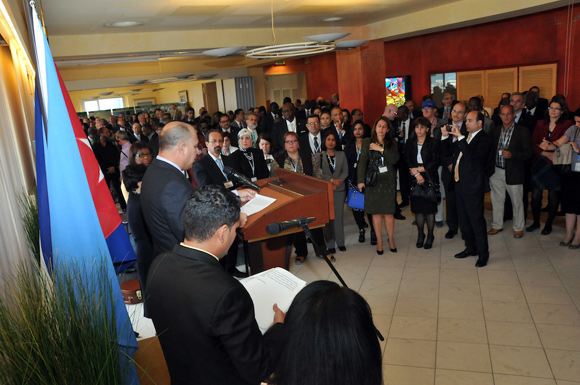 Morales described Cuba's activities in international cooperation in health over the past 50 years, especially the Cuban Health Brigades, which provide doctors to some 65 countries around the world. "Given the current challenges in health, we need to strengthen cooperation between all countries," he said.

WHO Director-General Margaret Chan and PAHO Director Carissa F. Etienne congratulated Morales on his designation during a reception following today's plenary session. It is the first time Cuba has occupied the presidency of the World Health Assembly. The rotating post corresponds to the Region of the Americas every sixth year.

Chan, who visited Cuba in 2012, remarked, "I saw during my visit a country that achieves the impossible with few resources but with important human capital."

Chan recalled her meeting with Cuban President Fidel Castro and her tour of research and development centers, health system facilities, and a university where people from around the world are trained. "In a place that faces difficulties, it is human capital that has ensured this country's success in the area of health."

During the reception, Cuba's delegation made a presentation on their country's technical cooperation in countries including East Timor, Venezuela, Brazil and many others.