The plenary session of the World Health Assembly offered a forum for health ministers from around the world to share their views on climate change and its impact on health——an issue that will be addressed in August at a summit organized by the World Health Organization (WHO). 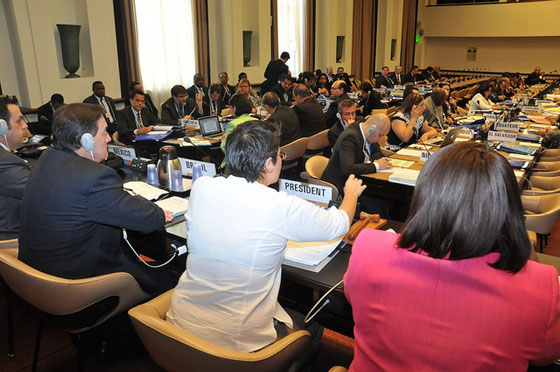 The delegations of the countries of the Americas made themselves heard on this subject in particular, explaining the effects that climate change is having in each country.

Representatives of 21 countries of the Americas addressed the plenary session, offering their perspectives on this issue, sharing their experiences, and raising specific concerns. The following is a summary of the presentations made by each country, in order of appearance:

The Minister of Health of Uruguay, Susana Muñiz, spoke about the implementation of the Framework Convention on Tobacco Control, referring specifically to "industry interference" in the implementation of tobacco control policies. "These legal battles that they have waged are not battles against Uruguay, Australia, or Norway; they are attacks on global health," she said.

Muñiz asked for everyone's help in drawing attention at the highest political levels to the global health costs of the tobacco epidemic. She suggested that specific tobacco control goals could be included in sustainable development objectives.

The minister also announced that the headquarters of an international tobacco control center will be established in Uruguay to provide assistance and facilitate information exchange on this subject, with an emphasis on smoke-free environments, health warnings, and treatments to quit smoking.

"All of us here in this plenary session may be defending the one thing we have to defend: national sovereignty in determining health policies, which ultimately means defending our peoples' right to health," the minister emphasized.

The Secretary of Health and Human Services, Kathleen Sebelius, expressed her country's support for WHO's efforts to address climate change and health. However, she pointed out, in light of the onset of new diseases and public health emergencies such as the one involving polio, "we still have more to do" on issues such as global health and noncommunicable diseases.

Sebelius commented that a meeting on global health security was held in February with WHO and other partners in order to move forward in the implementation of the International Health Regulations. She also said that WHO has a key role to play in addressing violence as a health issue. She emphasized her country's support on these issues, but recognized "that many measures to improve health should also be implemented at the domestic level." In this regard, she mentioned the action her government has taken to improve access to health services for the entire population.

The Health Secretary applauded the creation of a commission to reduce child obesity, which is a problem in the United States. She said her country is working on different initiatives with the same goal and that they remain optimistic about making improvements. Sebelius praised WHO's work to improve the health of all people.

The Minister of Health of Brazil, Arthur Chioro, highlighted Brazil's commitment to making improvements in the health system to reduce the effects of climate change on affected populations. He reaffirmed his government's commitment to environmental protection and to raising the standard of living and health in the Brazilian population.

Chioro said that a free public health system based on primary care and access to drugs has been constructed in Brazil over the past 25 years, making it possible to improve the country's health outcomes. "For Brazil, health is a social right that cannot be subject to the markets. Only with a people-centered, universal health care system can we ensure health," he affirmed.

The minister commented on the human resources for health policy and the Mais Medicos program, which has "completed and expanded health teams with family doctors——providing over 14 thousand Brazilian and foreign physicians who are giving quality care" to millions of people in the country. He expressed his satisfaction that the Recife Political Declaration on Human Resources for Health was on the World Health Assembly agenda.

Chioro invited the delegates of all the countries to visit Brazil in June this year, when the World Cup soccer matches begin. He said that Brazil is ready to welcome them, that any form of racism and intolerance will be rejected, and that a message of respect for all people will be reaffirmed.

Addressing the plenary session, the Minister of Health of Canada, Rona Ambrose, said that infectious diseases "know no borders" and that vaccines are the best way to prevent them. Many of these diseases, she added, threaten the lives of mothers and children in developing countries. "No mother should have to choose between her own health and that of her child," she affirmed.

Ambrose mentioned that her government is very committed to reducing maternal mortality around the world. She said that Canada also supports the resolution on the framework for ensuring maternal, infant, and young child nutrition.

Cuba: Committed to offering medical collaboration to whoever requests it

In his presentation, the Vice Minister of Health of Cuba said that the world faces major problems as a result of capitalism, many of them related to health and climate change. He commented that climate change has increased the number of vectors and bacterial agents that transmit diseases in many places and added that the Cuban national health system plays an active role in ensuring early warnings to identify such changes and their effects on health.

The Vice Minister also emphasized his country's commitment to offering medical collaboration to countries that request it. "There is enormous potential for sharing what we have, rather than what we don't need," he affirmed, adding that despite the U.S. economic embargo, his country has managed to keep the system working.

He also said that his country supports all the initiatives related to health security.

The Minister of Health of Mexico, Mercedes Juan, said that her country shares WHO concerns about the impact of climate change on health. She explained that in Mexico, this impact is reflected in a higher risk of vector-borne diseases such as dengue. As a result, a multisectoral strategy is being developed to mitigate the effects of climate change, in addition to measures taken in the health sector.

Juan called on the Member States to continue collaborating with WHO to consolidate actions and to speed up coordinated responses among countries.

The minister also reported that Mexico has implemented a national strategy to control obesity and diabetes, which she called a "complex problem that involves the public, private, and social sectors." She noted that this experience offers a new paradigm of health.

Juan also emphasized the need for a global response to the problem of antimicrobial resistance and expressed her country's support for such action.

Panama: Advances in the implementation of the Framework Convention on Tobacco Control

The delegate of Panama called on the countries to work toward a new treaty on climate change that is "ambitious and that ensures the well-being of our populations." She said work is needed to build resiliency in health systems in the area of disaster risk reduction and adaptation to climate change. She noted that this issue should be on the post-2015 development agenda.

She said that Panama's challenges and priorities continue to include moving forward on universal health coverage within the framework of a developing process that will ensure non-discriminatory access. "We are a small country with big dreams that does not forget the people," the delegate said, adding that her country is promoting a resolution on psoriasis and another on palliative care.

Peru: Government is working on a plan for adaptation to climate change and health

The delegate of Peru said his country supports the WHO work plan on climate change and health aimed at promoting public awareness of these phenomena, and emphasized the role that health plays in this context.

He noted that his government is working on a plan for adaptation to climate change and health. Specifically, in order to combat environmental pollution, the country is implementing a clean air project that involves imposing higher taxes on companies that use dirtier fuels. He recalled that Peru will be hosting the UN Climate Change Conference in December this year.

The delegate of Peru also recognized PAHO's "hard work and tireless commitment to improving health in the Americas."

The Minister of Health of Guatemala, Jorge Villavicencio affirmed his country's ongoing commitment to ending hunger and malnutrition. "We are advancing every day in the reduction of chronic malnutrition, the elimination of acute malnutrition, and the prevention and mitigation of social conditions that cause hunger in my country," he said.

Villavicencio emphasized the structural challenges facing a country that has emerged from a long conflict.

He pointed out that there have been structural reforms aimed at social inclusion and equity, as well as health-related democratic reforms. He emphasized that legal instruments have been developed around this commitment, such as the creation of the Zero Hunger Pact aimed at reducing chronic malnutrition by at least 10% during this government's term.

"We are convinced that by working hard on the Zero Hunger Pact and strengthening the revamped primary health care system, we will achieve many objectives with the support of WHO and PAHO," he concluded.

The Minister of Health of Argentina, Juan Luis Manzur, pointed out that the continuing global circulation of certain diseases poses a challenge for the countries of the Region, in particular the most vulnerable social groups. As an example, he mentioned the recent declaration of polio outbreaks as a public health emergency of international concern, "forcing the world to take rapid and concrete action."

Manzur highlighted the progress achieved by Argentina in fighting diseases. He reported that despite complex regional conditions, Argentina has reduced dengue cases by 90%, although it has yet to improve its performance against Chagas disease. He noted out that policies coordinated by regional groups such as MERCOSUR or UNASUR help to achieve approaches that require supranational action.

The minister reported that Argentina is working to institutionalize health policies and is taking a comprehensive approach to ensuring access to primary health care services.

Manzur also referred to vaccination efforts in his country, noting that 16 compulsory vaccines included in the national vaccination schedule are currently available free of charge. He emphasized that ten of these were added during the term of the current government, reflecting a greater investment in making vaccines available to the entire population. As an example, he mentioned the WHO-endorsed strategy to prevent hepatitis A through a single dose of vaccine, resulting in a 90% reduction in cases of this disease to date.

"I would like to invite all the States to commit themselves to global solidarity to conserve and protect access to health care within a framework of equity and social inclusion," he concluded.

Chile: States should strengthen their capacity to mitigate the impact of climate change on health

The delegate of Chile said that it is the duty of States to strengthen the capacity to reach agreements and take action to mitigate the effects of climate change on public health. He added that the health sector has an important role to play in mitigating this impact.

He reported that Chile is already making the necessary efforts to reduce its gas emissions and achieve an energy framework that generates lower greenhouse gas emissions. He said that the aim is to achieve harmonious growth and better health for the country's people.