Geneva, 19 May 2014 (PAHO/WHO) — Speaking on behalf of the countries of the Americas, Uruguay's Minister of Health addressed delegates to the 67th World Health Assembly, urging concrete, immediate action to mitigate the effects of climate change on health and to prevent a rapid increase in diseases that are sensitive to climate variations. 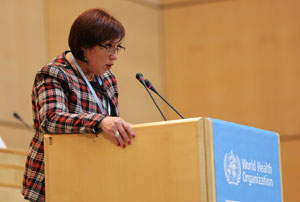 Minister of Health Susana Muñiz warned that not taking the necessary action would lead to increases in diseases such as cholera, malaria, dengue and chikungunya, which was introduced into the Americas for the first time late last year.

"Climate change is one of our greatest health challenges and for this reason, protecting human health must be a primordial goal that leads us to take concrete and ambitious action, including substantive agreements in negotiations on climate change," said Muñiz, adding that the upcoming WHO Conference on Climate Change and Health (27—29 August 2014) will provide an opportunity for such agreements.

Muñiz highlighted a number of areas in which the countries of the Americas have been working actively at the World Health Assembly, including human resources in health, health in the post-2015 development agenda, control of hepatitis and tuberculosis, regulatory systems, disabilities, violence, and the implementation of the Minamata Convention on Mercury, as well as noncommunicable diseases and maternal-child nutrition.

Muñiz said violence was an important issue that should be addressed from a perspective of public health and human rights. "Interpersonal violence affects everyone, but overcoming gender inequities as a key factor in violence against women and girls should be a priority in national strategies." She pledged the support of the countries of the Americas for the development of a global action plan once the resolution on the Assembly's agenda is approved.