Geneva, 22 May 2014 (PAHO/WHO) — A Dominican organization that fights leprosy and a Costa Rican medical research institute were honored today during the annual presentation of health awards at the 67th World Health Assembly.

From the Dominican Republic, the Leprosy Control Foundation, Inc./ Hubert Bogaert Institute of Dermatology and Skin Surgery was awarded the Sasakawa Health Prize, which includes a monetary award of US$40,000 that will be used to expand a program to reduce treatment gaps for children affected by leprosy. 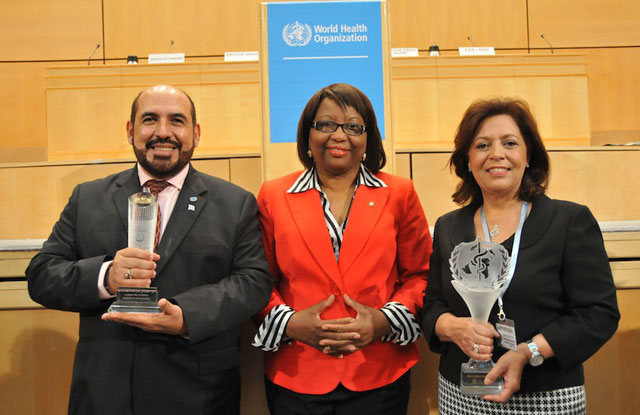 The National Institute for Health Research (INISA) of the University of Costa Rica was presented the United Arab Emirates Health Foundation Prize, which carries a monetary award of US$20,000, in recognition of its work in medical research in genetics and infectious diseases and early diagnosis of cancer, among other areas.

Representatives of both organizations were honored in a special session of the Assembly led by World Health Organization (WHO) Director-General Margaret Chan and Minister of Public Health of Cuba Roberto Morales Ojeda, President of this year's Assembly. Carissa F. Etienne, Director of the Pan American Health Organization (PAHO) also participated in the ceremony along with delegations from both countries.

The Sasakawa Health Prize went to the Leprosy Control Foundation, Inc./ Hubert Bogaert Institute of Dermatology and Skin Surgery, established in 1963. It works toward the elimination of leprosy and the main forms of dermatosis in the Dominican Republic and provides integrated specialized care for dermatological and sexually transmitted infections and HIV/AIDS. The Institute has developed ethical programs in the areas of research, education, screening, care and treatment of diseases, as well as primary care strategies for dermatology in rural and urban areas. Its innovative approach to the treatment of leprosy has greatly contributed to the reduction of the rates of incidence of leprosy. During its 50 years of existence, the Institute has treated over 13 000 patients, of whom more than 9 000 are fully cured, thanks to early case detection, suitable treatment, including multidrug therapy, as recommended by WHO, and educational campaigns. Decentralized community participation has reduced the cost of patient care and promoted local decision-making and the empowerment of caregivers.

The Institute proposes to use the prize money to fund a project entitled "Abrazo Solidario" (Embrace of Solidarity), whose main purpose is to improve and expand the existing paediatric programme to extend coverage to children affected by other skin diseases. The project aims to reduce treatment gaps for affected children, including those related to medicines supply, and provide protective clothing against ultraviolet rays, as well as psychological support to patients and their families and friends.

The Sasakawa Health Prize is awarded to a person or persons, an institution or institutions, or a nongovernmental organization or organizations having accomplished outstanding innovative work in health development, such as the promotion of given health programmes or notable advances in primary health care, in order to encourage the further development of such work. The prize was established in 1984 at the initiative of and with funds provided by Mr. Ryoichi, Chairman of the Japan Shipbuilding Industry Foundation and President of the Sasakawa Memorial Health Foundation.

The United Arab Emirates Health Foundation Prize went to the National Institute for Health Research (INISA), which is attached to the faculties of Pharmacy, Medicine, Microbiology and Odontology at the University of Costa Rica. Its mission is to help to promote and maintain human health through scientific research, education and outreach in a comprehensive and ethical framework. The Institute was created in 1975 as a multidisciplinary academic unit dedicated to scientific research in the fields of individual and collective ageing, genetic and infectious diseases, early detection and diagnosis of gastric cancer, which has a high prevalence in Costa Rica, and genotoxic damage from occupational exposure to pesticides. It has achieved a notable reduction in infant mortality thanks to the discovery of a plasmid for ampicillin-resistant strains of Shigella dysenteriae and its transmission to Escherichia coli, and the creation of milk banks in urban and rural areas. It has also designed strategic communication initiatives to improve the eating habits of Costa Ricans.

The United Arab Emirates Health Foundation Prize is awarded to a person or persons, an institution or institutions, or a nongovernmental organization or organizations having made an outstanding contribution to health development.