Ministers and delegates of the countries of the Americas made several presentations before the World Health Assembly between the 19th and 21st of May. In addition to speaking on their proposed topics, the representatives also took the opportunity to highlight progress achieved, but also stressed pending challenges for the region. 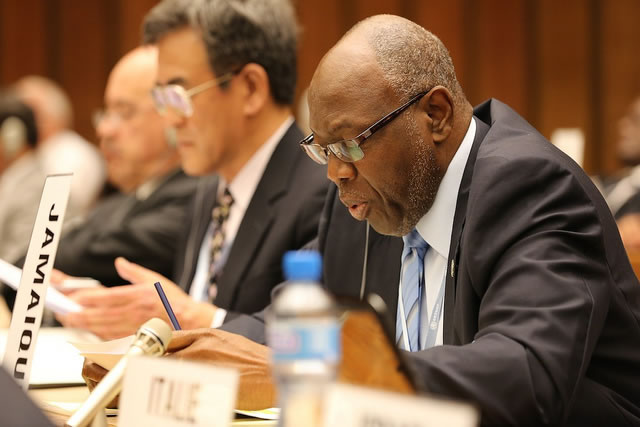 This summary reports the topics highlighted by the delegations, in the order in which they took the floor.

Venezuela: An appeal to define universal health coverage so that it is not used for other purposes

Venezuela is working hard on human resources education and has promoted community participation in the development of its health system, stated the Minister of Health of Venezuela, Francisco Armada.

"We continue to achieve, we continue to advance despite several interventionist attempts", stated Armada. He stressed that these attempts have taken the form of social demonstrations against health facilities, and added that they have also been linked to the subject of climate change.

Armada stated that the global system of consumption seeks an accumulation that "will irremediably lead us to a state in which the life of the planet itself will be unsustainable. There is no possible resilience in capitalism, due to the changes in the way of life that it entails", he added. The minister said that his country works with a model that is sustainable for the planet and that has enabled advancement toward universality in health.

However, on this point, Armada expressed his concern over the possibility of using the concept of universal health coverage to support the privatization of healthcare or for purposes other than what is right. He thus called for a definition of universal coverage so as to avoid ambiguities.

Colombia: Reflect on the role of WHO in the debate on the issue of illegal drugs

Colombia has suffered serious socioeconomic and environmental consequences of the effects of climate change. In response, the government of the country has implemented measures such as an intersectoral plan of adaptation to climate change, stated the Colombian delegate. This plan defines guidelines for several sectors, including health and environment.

In this context, the delegate noted that, last year, WHO certified the elimination of onchocerciasis in Colombia, which became the first country in the world to achieve this. The delegate also called attention to the need for producing evidence and evidence-based responses that can be applied to environmental health.

The delegate also underlined the need for reflection on the role that WHO should play in the debate on illegal drugs from a health standpoint. He recalled that the United Nations Assembly will address this subject in 2016 and that UN System agencies can contribute to the debate.

Ecuador: Public health should be considered a right, not a commodity

Ecuador has been working on radical measures to ensure the protection of its environment and nature, seeking also to improve the life of its population, explained Minister of Health Carina Vance.

"Health is the beginning and the end. We need health to live well, and must live well to be healthy", said. Therefore, the topic of environment and health has been addressed from an intersectoral perspective, which conceives of "public health as a right, not a commodity."

Notwithstanding all of these efforts, which are already producing results, what the rest of the world does or fails to do affects us, particularly with respect to climate change, warned Vance. She thus called on the health sector to play an active role in decision-making opportunities so as to contribute to planning of sustainable development.

The Minister of Public Health of Paraguay, Antonio Barrios, said that his country has frequently been affected by extreme climate change events, which have had a severe impact on living conditions, on the economy, and on individual means of production, often with the emergence of vector-borne, diarrheal, or skin diseases.

Therefore, stated Barrios, the nation of Paraguay, with technical cooperation from PAHO/WHO, is promoting a program for continuous improvement of national capabilities and training health teams to respond rapidly in this context.

"Our environment is everyone's responsibility. We have an unpaid debt of care, and need our mutual assistance to address it", he concluded.

After referring to actions implemented by her country to mitigate the effects of climate change on health, the Minister of Health of Honduras, Yolani Batres, focused her presentation on violence, particularly that targeting women and girls. She highlighted the efforts made by Honduras for the prevention of gender-based violence.

She explained that the country has strengthened interventions against this type of violence by creating family counseling services, which survivors and victims of this form of violence can attend. She also pointed out that the health sector "should increasingly perform a steering role when calling for action" against gender-based violence, and noted that efforts should also focus on the creation of strategic partnerships and in improving data collection on this subject.

She also spoke on work being done for the prevention and control of non-communicable diseases, which involves a process of health sector reform within a framework of national commitment and of the Global Action Plan presented at the World Health Assembly.

Barbados: Climate change and health in the post-2015 development agenda

Boyce urged that this topic be made one of the main themes of the post-2015 development agenda, especially for small islands such as those of the Caribbean.

The scientific community has already warned of the impact of climate change on health, insofar as it endangers access to water, food security, and safe housing — all essential elements for good health, said the minister. Furthermore, he added, it contributes to the emergence of vector-borne diseases, such as dengue, and to the emergence of new threats, such as Chikungunya virus.

"As other countries in the Caribbean, Barbados is vulnerable to the impact of climate on human health", he stressed, and added that this should be considered within the context of human rights. He also listed measures that his country is implementing to achieve a "green economy."

The Minister of Health of Jamaica, Fenton Ferguson, highlighted the "urgent need" for a comprehensive response to the effects of climate change on health, and maintained that the deliberations of the Assembly should provide a solid foundation for work in the next conference on this subject, because this topic should be added to the health agenda.

Ferguson emphasized that climate change is leading to changes in the epidemiological scenario and is accelerating the spread of diseases, with a major effect on economies. He pointed out that there has been an increase in the number of cases of dengue, and that in view of the increase in international travel, countries are at a heightened risk of communicable diseases. He noted that countries that have eliminated diseases such as malaria are beginning to see imported cases, and added that the recent emergence of Chikungunya, a virus that is transmitted through the bite of a mosquito found in the Caribbean and that had not yet entered the Americas, is also an important issue for the subregion.

"We must all commit to addressing this subject. World health is at risk, and failure is not an option", the minister stressed.

Furthermore, regarding the care of people living with HIV/AIDS, he asked WHO to continue to negotiate with businesses so as to ensure affordable access to medicines and supplies, among other points.

Saint Kitts and Nevis: Supporting the Caribbean in matters of health and climate

The delegate from Saint Kitts and Nevis stated that nothing contributes as much to instability than a lack of water and food, and that this issue is linked to the effects of climate change. He said that tourism and agriculture, which are the lifeblood of the Caribbean, can be threatened by such change.

"Climate is a social determinant of health", he stressed. He also listed the actions that his country is taking in order to mitigate the effects of climate change, with the support of the Caribbean Public Health Agency and PAHO.

In this regard, he requested the support of WHO on matters of health and climate in the Caribbean, which is one of the areas most vulnerable to the effects of climate change, and added that he hopes that, after the end of the World Health Assembly, progress is made toward a plan of action to address this subject in all small islands.

In turn, the representative of Nicaragua explained that his country promotes rational resource use to avoid affecting the environment and to improve the health of its population, and is actively committed to this subject.

However, he pointed out that "change [in this area] can only be achieved if the model of consumption is changed," noting that this is strongly linked with non-communicable diseases, but is also tied to "[our] inability as a species to end poverty and hunger." He assured that Nicaragua is making a major effort to advance in this regard and ensure better health for its population.

Guyana: Improvements in health and better prices for vaccines

The Minister of Health of Guyana, Bheri Ramsaran, added his voice to the call for actions to mitigate the impact of climate change on health, which presents a growing threat to global public health.

The minister noted that, several years ago, his country was affected by massive floods that led it to lose almost 60% of its gross domestic product. Although it did not receive much international attention, the reconstruction process was long and costly, said the minister. In this regard, he celebrated the fact that WHO would convene a summit on the impact of climate change on health, because this will enable the organization and its regional offices to understand the needs of each country in this matter.

Furthermore, he highlighted the increasing costs of medicines and particularly vaccines, and called for a reassessment and for proposals to the industry on ways to reduce these prices. He noted that Guyana is still part of the group of countries supported by the GAVI Alliance in vaccine-related matters. Moving forward, he said, it is necessary to evaluate mechanisms that make it possible to lower prices. He mentioned the role of the PAHO Revolving Fund in achieving polio eradication by allowing access to affordable vaccines. The fund allows the countries of the region to purchase drugs at cost and thus reduce their prices.