"Salt reduction is recognized as the most cost-effective intervention for population-based prevention of hypertension, and it is one of the WHO best buys," said PAHO Director Carissa F. Etienne. "The cardiovascular benefits of reduced salt intake are on par with the benefits of population-wide reductions in tobacco use, obesity, and cholesterol levels." 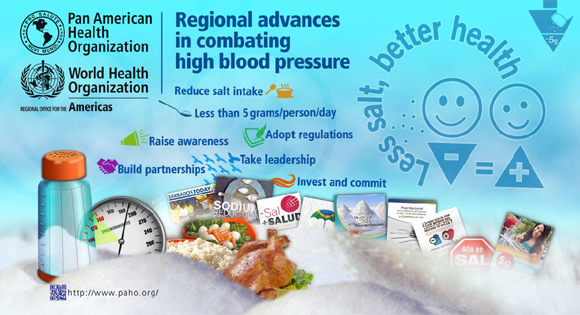 In the Americas, average per capita salt consumption exceeds the recommended limit of 5 grams per day, with recent studies showing average intake of 11 g/day/person in Brazil, 9 g/ day/person in Chile, and 8.7 g/day/person in the United States. Between one-fifth and one-third of adults in the Americas suffer from high blood pressure.

Research shows that people are generally unaware of how much salt they consume. Most dietary salt comes not from salt added at the table or in cooking but rather in processed foods, including ready-made meals as well as bread, processed meats, snacks and breakfast cereals.

Reducing salt at the population level by just 1 gram per day per capita over 10 years would be more cost-effective than using medications to lower blood pressure in all people with hypertension, according to research. The goal of the Salt-Smart Americas initiative is to reduce salt consumption gradually to the internationally recommended target of less than 5 g/day/person by 2020.

During the event at the UN, experts from PAHO/WHO and from Argentina, Barbados, Brazil and Canada-four of the 12 countries that have national salt-reduction initiatives- described successful efforts to reduce salt at the population level and called on more countries to join the Salt-Smart Americas initiative.

"For those countries that still have not joined the initiative, I invite you to take a look at the experiences of your neighbors," said PAHO Director Etienne. "Let's be part of the second wave of countries that will take on the challenge and contribute to reducing salt overconsumption in the fight against hypertension."

The event highlighting the Salt-Smart Americas initiative was held on July 10 as part of the 2014 United Nations NCD Review, held on 10-11 July to examine progress, share successes and discuss lessons learned in fighting noncommunicable diseases (NCDs) since the 2011 UN Political Declaration on NCDs.

PAHO, founded in 1902, is the oldest international public health organization in the world. It works with its member countries to improve the health and the quality of life of the people of the Americas. It serves as the Regional Office for the Americas of WHO and is part of the Inter-American system.