Regulations on labeling, promotion and advertising of processed foods are needed to reverse "exponentially increasing" patterns of unhealthy consumption

Washington, D.C., 30 August 2014 (PAHO/WHO) — Countries in the Americas—which have the highest obesity rates in the world—are fighting the obesity epidemic with new, stricter regulations on food labeling, promotion and advertising.

The regulations, which seek to inform and protect consumers while creating incentives for healthier eating, are "important advances that should be stimulated throughout the region," said Dr. Carissa F. Etienne, Director of the Pan American Health Organization (PAHO), speaking this week at the International Conference on Food Labeling and Fiscal Policies on Healthy Food and Obesity Prevention in Quito, Ecuador. 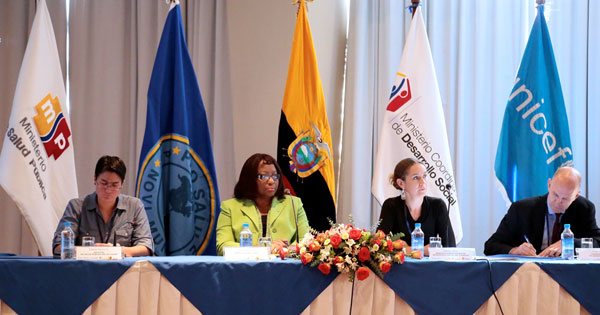 In the Americas, 1 in 2 adults is overweight or obese, and the proportion reaches 75% or more in some countries. Among school-age children and adolescents, some 20-30% of are overweight or obese, and these figures are increasing. Growing obesity is one of the major contributors to chronic diseases such as heart disease, cancer, and diabetes, which are now the leading causes of death and illness throughout the region.  "These conditions bring not only suffering and pain but also the specter of economic bankruptcy for both national economies and family budgets," said Etienne.

The causes of the epidemic include "profound changes in eating patterns in recent decades, with an unprecedented increase in consumption of processed foods and a parallel decrease in consumption of natural products," said Etienne. Although the countries of the Americas are "rich and diverse" in healthy, natural foods, the region is increasingly making junk food "the new basic food."

Etienne said Ecuador's Law on Food Security and Sovereignty, which was updated in 2012, is an example of the kind of efforts that are needed to reverse this trend. The law's provisions protect small farmers' rights to produce healthy foods, guarantee consumers' rights to decide what they want to consume, and stimulate the development of fair international trade. Efforts such as these, aimed at increasing access to affordable healthy foods, "fall within the framework of strategies that both PAHO and WHO promote to stop this pandemic," said Etienne.

Also during this week's conference, Minister of Health of Ecuador Carina Vance presented data from her country's National Survey on Health and Nutrition (ENSANUT) that show declines in malnutrition but also significant increases in overweight and obesity. She said Ecuador's response to overweight and obesity includes a new system of food labeling based on WHO recommendations, which tells consumers how much sugar, salt and fat are in processed food products.

"The great challenge is to promote public policies that aim to transform the environment, encourage healthy behavior, and inhibit those unhealthy behaviors that are increasing exponentially and that promote harmful and unhealthy patterns of consumption."

The International Conference on Food Labeling and Fiscal Policies on Healthy Food and Obesity Prevention was organized by the ministries of social development and public health of Ecuador with support from PAHO and UNICEF.

For more information on the conference (in Spanish) select this link.