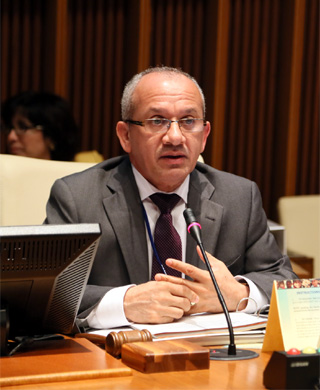 The Minister of Public Health and Social Welfare of the Dominican Republic, Freddy Hidalgo, was elected president of the 53rd Directing Council of the Pan American Health Organization (PAHO).

Hidalgo, in charge of the Dominican Health and Welfare portfolio since August 2012, was born on September 5, 1958, in Fantino, Sanchez Ramirez province, Dominican Republic.

He studied medicine at the Autonomous University of Santo Domingo (UASD), where he graduated in 1985, and completed his specialization at the "President Estrella Ureña" Hospital in Santiago, supported by the Mother and Teacher Pontifical Catholic University (PUCMM).

Hidalgo holds a Master of Public Administration backed by the Complutense University of Madrid (UCM), Spain; a Specialization in Social Security and Public Health from the Santo Domingo Institute of Technology (INTEC); and several diplomas which include: Agent of Change in Health Care (INTEC), Social Security from Universidad Iberoamericana (UNIBE) and the Dominican Medical College (CMD).

The Minister began his professional career as a general practitioner in the "Siegfried Alba" Hospital in his native Fantino; he is also an internist. Until the time of his appointment as Minister of Public Health and Social Welfare, he was regional director of the Health Cibao Central-Region VIII (provinces: Monsignor Nouel, La Vega, and Sánchez Ramírez).

During his tenure as the head of Health Region VIII he twice received the bronze medal in the "Awards to Quality" given by the Ministry of Public Administration (MAP) of the Dominican Republic.

In addition, he was selected by the United States Agency for International Development (USAID) as a recipient of "Pilot Plan for Excellence in Maternal and Child Health" in recognition of his work performance.