About Hand Hygiene in Clinical Settings

The SAVE LIVES: Clean you Hands initiative was launched by WHO Patient Safety Program as part of the Cleaner Care is Safer Care program.

Every year, on May 5th, the World Health Organization celebrates the SAVE LIVES: Clean Your hands Campaign. The countries in the Americas joint other countries around the world to renew their commitment in improving Patient Safety and Care through awareness campaigns focussing on hand washing.

Improve and sustain hand hygiene in your health-care facility and help save lives by reducing health care-associated infections.

Register with WHO now if you haven't already done so to be part of this global movement to improve hand hygiene! If you have already registered, there is no need to register again. view number of hospitals registrated by country) Register for SAVE LIVES: Clean Your Hands

About Hand Washing in Social Settings

Each year about 3.5 million children, die before their fifth birthday due to preventable diseases, mainly diarrhea and acute respiratory diseases. The adoption of the habit of washing hands with soap and water before eating and after defecating, can prevent nearly half the number of deaths from diarrhea, and almost one-fourth of deaths from acute respiratory diseases.

To achieve the Millennium Development Goal #4 of reducing, by more than two-thirds, the number of deaths in children under 5 years of age, before 2015, it is necessary to promote hand washing on a large scale.

In order to forge international partnerships and promote hand washing, the Global Public-Private Partnership for Handwashing (PPPHW) promotes, since 2008, the Global Day Handwashing Day, held on the 15th of October, each year.

Also in collaboration with Global PPPHW partners, the Pan American Health Organization/World Health Organization (PAHO/WHO), has been encouraging the accurate counting of participants in GHD events to provide incentives and recognitions for breaking new records every year. The purpose of this initiative is to support the mobilization of the schools during the celebrations of the Global Handwashing Day, attract the attention of the media, and strengthen country programs promoting hygiene, hand washing and sanitation throughout the year 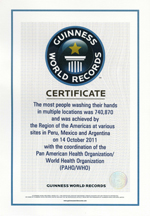 Since 2008, PAHO worked with the countries in the Americas towards breaking a Guinness World Record on handwashing. It was in 2009 when a record number of 52,970 people washing their hands at the same time was established in Bangladesh. In the Americas, the number of participants who registered for a Guinness Records increased from 7,585 in 2009, to 21,470 in 2010, and 740,870 in 2011 which currently stands as the Guinness World Record of people washing ther hands, at the same time, in multiple locations.

Welcome to the Handwashing Initiative

Hand washing in the Americas

The simple habit of washing hands with soap and water at critical times—especially before eating or preparing food and after using the toilet—can prevent nearly half of deaths from diarrhea and almost one-fourth of deaths from acute respiratory diseases. Hand washing promotion in schools plays a role in reducing absenteeism among primary school children.