Countries of the Americas benefit from eHealth, but challenges to implementation persist

Washington, D.C., 25 October 2016 (PAHO/WHO) - A new survey by the Pan American Health Organization/World Health Organization (PAHO/WHO)shows that several countries of the Americas are taking advantage ofinformation and communication technology for health (known as electronic health, or eHealth), but much remains to be done to expand its use and achieve its maximum potential.

“In recent years, eHealth has developed very quickly, and its use is profoundly changing health care,” said PAHO/WHO Assistant Director Francisco Becerra. “We can take even better advantage of the range of opportunities these technologies offer to close gaps in care, improve health, and save lives.” 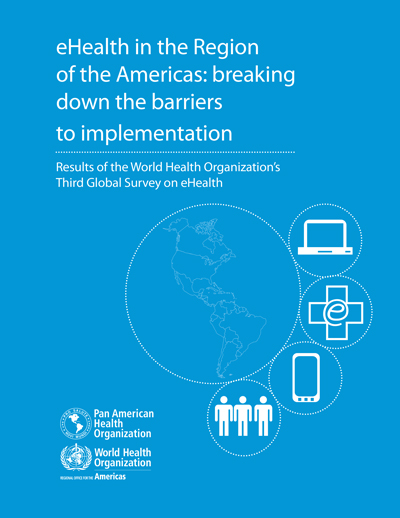 The report eHealth in the Region of the Americas: breaking down the barriers to implementation presents results from the WHO Third Global Survey on eHealth in the Americas, which was completed in 19 of the region’s 38 countries. The countries that responded to the survey are Argentina, Canada, Chile, Colombia, Costa Rica, Cuba, the Dominican Republic, Ecuador, El Salvador, Guatemala, Honduras, Jamaica, Mexico, Panama, Paraguay, Peru, Trinidad and Tobago, the United States, and Uruguay. Eight topics were covered, including electronic health records, telehealth, mHealth (using mobile devices for health), virtual training for health personnel, legal frameworks for eHealth, the use of social networks, and “big data.”

The report examined the status of eHealth and its role in promoting universal access to health and universal health coverage. PAHO’s Member States set the goal of achieving universal health, defined as ensuring that all people have access to the quality health services they need without risk of financial difficulties.

According to the results of the survey, 95% of the surveyed countries use eLearning to train current health professionals, and future professionals will receive this type of training in 90% of the countries. Use of teleradiology was reported in 90% of the countries, social networks for health in 74%, remote monitoring of patients in 58%, and mobile health in 58%. Furthermore, 84% reported having strategies for national health information systems.

National digital health record systems are used in more than half of the countries that responded to the survey (53%), while other practices such as telepathology (42%), telehealth (37%), and the use of big data for health (32%) show lower rates of implementation.

“The big challenge is to ensure the sustainability and continuity of these types of initiatives, whose benefits begin to be seen after 10 to 15 years. And to accomplish this, it is fundamental to promote the production of scientific evidence to raise awareness among decision-makers about the importance of investing in eHealth,” said David Novillo-Ortiz, coordinator of PAHO/WHO’s Regional eHealth Program.

The PAHO report recommends greater institutional support for the development of national eHealth policies and strategies in response to disparities in the use of eHealth in the region’s countries. Only 61% of surveyed countries have a national eHealth policy or strategy, which is a lower proportion than the 78% of countries in the region that have a national policy or strategy for universal health.

The report also calls for stronger legislation to support electronic health records, since only 26% of the surveyed countries currently have specific legislation covering this area. The same is true of mobile health practices: 74% of respondent countries reported not having any regulatory body to assure the quality, safety, and reliability of mHealth.

Individuals and communities are using social media to learn about health problems in 74% of the Member States that answered the survey. The report urges countries to establish a national policy or strategy on the use of social networks in the health professions and to regulate the use of big data for health. This has been done in only 21% and 11%, respectively, of the countries surveyed.

The report, which shows the progress made by countries of the Americas within the framework of PAHO’s Strategy and Plan of Action on eHealth, was presented in late September of this year, during the 55th PAHO/WHO Directing Council.

— eHealth in the Region of the Americas: breaking down the barriers to implementation. Results of the Third Global eHealth ON Survey (World Health Organization)
—  Strategy and Plan of Action on eHealth: Midterm Review
— Novillo-Ortiz D, D’Agostino M and Becerra-Posada F. Role of PAHO/WHO in eHealth Capacity Building in the Americas: Analysis of the 2011–2015 period